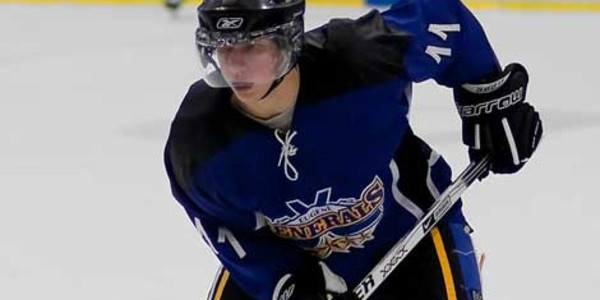 The Eugene Generals (14-3) were able to sweep the Tri-City Titans (8-10) last weekend in Kennewick, WA. The Generals were able to walk away with a 6-2 victory on Friday, and were able to come from behind twice on Saturday for a 5-3 win.

“We played our best 20 minutes of hockey in the first period on Friday,” Generals head coach Jay Miller stated. “We did enough to hold on in the second and third periods on Friday, but we didn’t play as well as we did in the first. On Saturday we allowed the Titans to gain the lead, but our boys fought till the end. We haven’t really been in the position too often this season when we’ve had to come from behind late in the game, and I was proud of how we performed in that situation.”

On Friday the Generals were able to jump out to a 3-0 lead after the first period, and added another to make it 4-0 after two periods of play. The Generals two goals early in the third period to make it 6-0, but Tri-City spoiled the shutout with two goals with less than five minutes remaining in the contest.

Four players had a multiple point night on Friday. Mat Topolewski and Ray Frianeza each had a goal and an assist, and Ian Evans and Eric Watters each had two assists. Trevor Ruiz, the youngest player in NORPAC, scored his first goal in the contest, and Blake Bishop, Ryan McDonald and Brad Main each had goals as well. Brayden Lahti had as assist in the game, and Dylan Woodring was able to stop 29 of the Titans 31 shots.

Neil Holder led the Generals with a hat trick, including the game winning power play goal. Mat Topolewski had his second consecutive multiple point night with a goal and an assist, and Peter Mingus had two assists. Christian Merritt scored the other goal for the Generals, and Blake Bishop, Ian Evans, Sean Park, Eric Watters, Ryan McDonald and Brad Main each had an assist.

The Generals will travel to Beaverton, OR this Thursday for a 7:00 PM game against the River City Jaguars at Valley Ice Arena. The game will be broadcast in audio only on EGHN. The Generals will then host the Jaguars on Friday and Saturday night at 7:35 PM at Lane Events Center-Ice. The games will be broadcast on EGHN. For more information on upcoming games or EGHN please visit eugenegenerals.com.