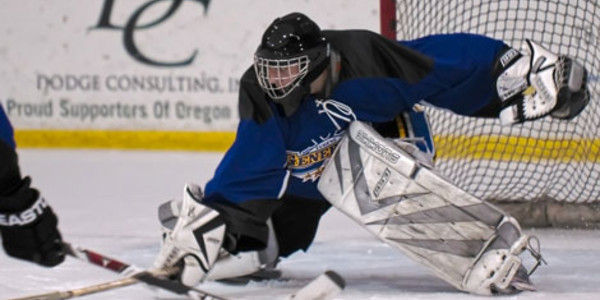 Eugene Generals goaltender Dylan Woodring was able to stop all 32 shots the River City Jaguars (7-12) threw his way as the Generals toppled the Jaguars 6-0 at Valley Ice Arena in Beaverton, OR on Thanksgiving. The Generals started the scoring early, and never looked back as they pulled themselves within two points of first place in the NORPAC Pacific Division (the Generals have two games in hand over the Seattle Totems).

“We played one of our most complete games of the season tonight,” Generals head coach Jay Miller stated after the game. “We still have a lot of areas that we need to work on, but we’re improving. We need to forget about the big win last night, and play with the same focus and intensity that got us the result.”

The Generals will face River City tonight and tomorrow night at Lane Events Center-Ice in Eugene at 7:35 PM. The games will be broadcast on EGHN. For more information on upcoming games or EGHN please visit eugenegenerals.com.