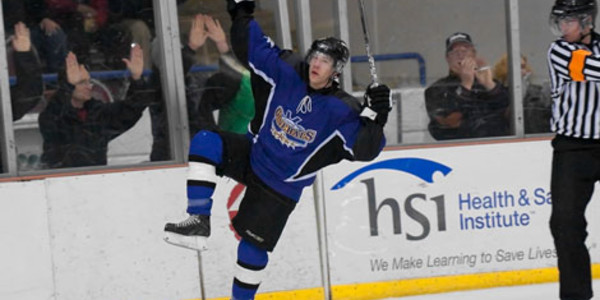 The Eugene Generals (19-3) were able to defeat the Puget Sound Tomahawks (8-14) in two one goal games this weekend in Bremerton, WA. The Generals had to win in two different ways, however, as they had to come from 2 goals behind in their 4-3 victory on Friday night, and they had to hold a 1 goal lead late in game on Saturday.

“I’m really happy with how our team battled on both nights,” Generals head coach Jay Miller stated after Saturday’s contest. “We didn’t necessarily play our best games of the season, but they were pretty solid. I was extremely happy with our defensive performance on Saturday. I have to give credit to Puget Sound. They played us tough both nights, and they made us fight for the wins.”

The Generals were trailing 3-1 with less than 8 minutes to play in the third period on Friday night. The only goal the Generals had scored up to that point was a shorthanded goal by Eric Watters and assisted by Brendan Weimer and Dylan Woodring with 2:24 left in the second period. Watters would assist on the Blake Bishop goal that would put the Generals within 1 of the Tomahawks with 7:40 left in the game.

Bishop would get his second goal of the night on the power play to knot the game up at 3 a piece with 4:13 left to go. Watters had his third point of the game with an assist, and Tyler Poulsen also assisted on the play. The Generals would take the lead with 1:11 left to go in the game when Bishop assisted Ryan McDonald on the power play, and that was a lead they would not relinquish.

The game on Saturday was a different story altogether. The Generals took the lead with 2:41 left to go in the first period, when Neil Holder assisted Brad Main. Ryan McDonald would get his second game winning goal in as many nights 0:50 into the second period. The Tomahawks would make it a 1 goal game early in the third period, but the Generals, who had one of their best defensive performances of the season, would secure the win.

The Generals will host the Puget Sound Tomahawks this Sunday at 7:35 PM at Lane Events Center-Ice. The game will be broadcast on EGHN. For more information on upcoming games or EGHN please visit eugenegenerals.com.