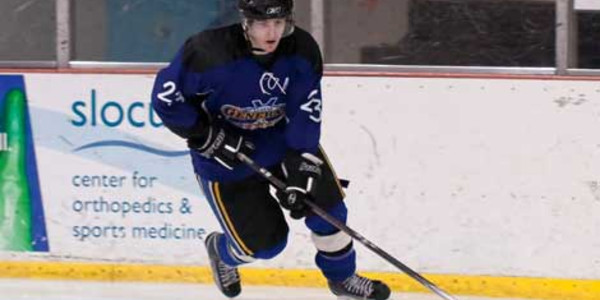 Eugene, OR – The Eugene Generals (2-0) took a 2-0 series lead against the Tri-City Titans (0-2) in the Pacific Division Semi-Finals with a 5-1 win at Lane Events Center-Ice. The Generals will travel to Kennewick, WA for Game 3 at 7:00 PM at the Toyota Arena.

“We played really well in the first two periods, and we built a pretty big lead heading into the third,” Generals head coach Jay Miller stated. “We didn’t finish as well as we could have, and we’ll have to fix that tomorrow. We did our part on home ice, and now we have to stop Tri-City from doing their part.”

The Generals got out to a 1-0 lead 7:54 into the first period when Brad Main assisted Connor Bambico. Eric Watters would make it 2-0 on the power play when Ryan McDonald assisted him 13:15 into the frame. The Generals were able to outshoot the Titans 29-5 in the first, which set the tone for the game.

The Generals would make it 3-0 when Eric Watters scored an unassisted shorthanded goal 4:13 into the second period. The Titans would make it a 3-1 game 9:58 into the second, but Brad Main made the Generals lead three once again with nine seconds left in the period. Mat Topolewski scored the Generals final goal of the game, and Brayden Lahti and Kyle Kennedy got the assists 2:01 into the third. Dylan Woodring made 33 saves in the win.

The Generals game tomorrow night in Kennewick will be broadcast on EGHN in audio only. For more information on upcoming games or EGHN please visit eugenegenerals.com.