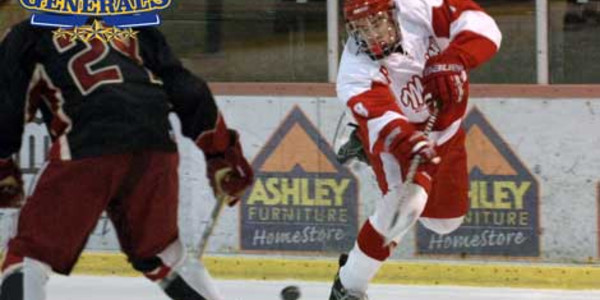 The Eugene Generals announced earlier today that they have tendered Patrick Moodie from the Mission AZ U18 AAA team for the 2010/11 season. The 6-4, 180 lb forward from Glendale, AZ scored 8 goals and added 13 assists last season with Mission AZ.

“I feel like signing with the Generals is a great opportunity for me to get some good Junior hockey experience under my belt,” Moodie stated. “I’m really looking forward to having the opportunity to play hockey next season for the Generals, it’s just really what I want to do.”

Moodie’s 6-4 frame will bring some size to the Generals roster, and he is expected to add to the Generals physical game. The Generals, and Moodie, aren’t looking for only physical play, however, and they expect him to be a vital part of their offensive output next season.

“I feel like I’m a well rounded hockey player. I’m physical, but I can put the puck in the net as well. I hope I can bring some physicality and toughness to the team, but I will also bring a general respect for the game and my teammates both on and off the ice.”

The Generals coaching staff has been very impressed with Moodie since the first time they saw him, and they expect him to play a big role next season.

“Patrick really turned our heads when we first saw him,” Generals head coach Jay Miller stated. “Not only was he strong on the puck, but he worked hard away from the puck and that’s a really hard characteristic to find. He looks to bring some impressive size and great work ethic to the roster next season.”

For more information on Generals tenders or the upcoming season please visit eugenegenerals.com.