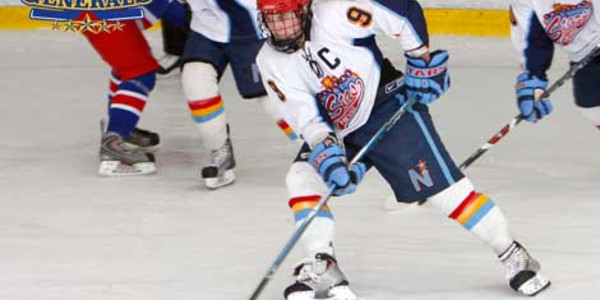 The Eugene Generals announced earlier today that they have tendered Cody Milligan of the Nevada Stars U16 AAA team. Milligan scored 25 goals and added 22 assists in 36 games with the Stars last season, and was one of the top players in the North American Prospects Hockey League’s (NAPHL) U16 division.

“I tendered with the Generals because they have showed me a lot of interest, and they’ve stayed in consistent contact with me over the past eight months,” Milligan said. “I’m really looking forward to playing Junior hockey and playing well. My main goal is to do as well at the Junior level as I did this season, and come in the top two again.”

Milligan played 20 games in the NAPHL this season for the Stars, and he racked up 15 goals and 17 assists. Milligan led the league in assists, and was ranked second in points. For his efforts in the league, Milligan was named to the U16 All-NAPHL First Team.

“It was pretty cool to be named to the U16 All-NAPHL First Team. It was a good experience playing in that league, seeing what the competition was like across the country and being in the top three in points when it was all said and done.”

The 5-10, 170 lb, 16 year old forward will be a big asset to the Generals in the 2010/11 season. Milligan brings a rare combination of skill and tenacity that would bolster any squad.

“If I had to describe myself as a hockey player, I would say that I’m a hard working power forward with a pretty hard shot. I also try to lead by example. On the ice I can definitely bring a physical aspect to the team, I’m a good fore-checker and I’m pretty good on the power play. Off the ice I will bring a positive attitude, and a hard working attitude. In the gym I’m all business, and don’t like it when players don’t take the off-ice work seriously.”

The Generals have been recruiting Milligan since last summer, and they are very excited to have him tendered for the upcoming season. Milligan has proven to be an extraordinary player at the youth level, and the Generals expect him to have no problems translating that success to the Junior game.

“I’m extremely excited about tendering Cody,” Generals head coach Jay Miller stated. “This is a kid that can absolutely come in, take in all aspects of our game plan, and be a dominant force. I look for him to come in and be a contributing factor to our future success.”

For more information on Generals tenders or the upcoming season please visit eugenegenerals.com.