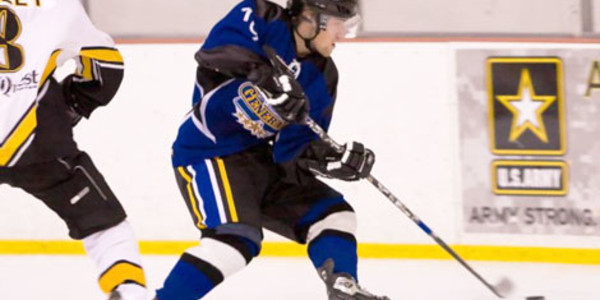 The Eugene Generals (33-7) were able to win eight game season 5-2 tonight against the Tri-City Titans (18-22) with a 7-2 victory. The Generals were also able to tie their franchise record in wins, and will have an opportunity to break the record tomorrow against the Titans.

“We were able to jump on the Titans early tonight,” Generals Head Coach Jay Miller stated after the game. “We controlled the game from start to finish, but we have some areas we need to fix. The guys played their best hockey in the third, and I can’t complain about that. It feels great to tie the franchise record for wins in a season, but we have bigger things on our minds right now.”

The Generals would carry a 3-1 lead heading into the second period, and would add to that lead early. Blake Bishop scored an unassisted goal 2:19 into the second, and Ryan McDonald and John Strahle assisted Michael Frei on the power play 4:31 into the period to make it a 5-1 game. Ricky Doubrava would make it a 5-2 game with 3:20 left to go in the second, but that would be all the scoring for the Titans on the night.

Michael Schlagel and Michael Frei assisted Tyler Poulsen 1:21 into the final period to make it 6-2, and John Mullin assisted Johnathan Isbell with 30 seconds left to go to put the final nail in the coffin.

The Generals will host the Titans tomorrow night at 7:35 PM at Lane Events Center-Ice. The game will be broadcast on GiTV. For more information on upcoming games or GiTV please visit eugenegenerals.com.