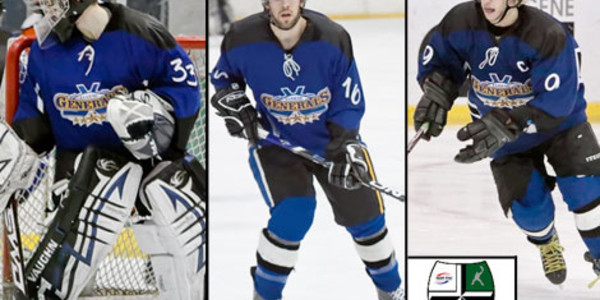 Kevin Aslett, John Strahle and Michael Frei were all named to the 2009 NORPAC Pacific Division All-Star Team earlier today. The Generals were the only team to have more than one player recognized as a First Team All-Star.

“It’s good to see Aslett, Strahle and Frei get recognition for their performance during the season, though it comes as no surprise to me,” Generals Head Coach Jay Miller stated. “All three players will be moving on to the collegiate level next season, and we wish them the best of luck. I’m sure they’ll make an impact wherever they go.”

The stay-at-home defenseman John Strahle was third in the Pacific Division in points during the 2008/09 Regular season with 12 goals and 25 assists in 45 games. Strahle ranked fifth on the Generals with 312 on the season, and was sixth on the team (second among defensemen) in plus-minus with a plus-35 during the season.

Michael Frei was second in NORPAC with 46 goals, and was first in the league in goals per game (1.12). Frei broke the previous Generals record for goals in a season by five, which was set by Ryan Schank in the Generals inaugural 2005/06 campaign. Frei was also third in the league in points with 89.