The Battle of the Unbeaten 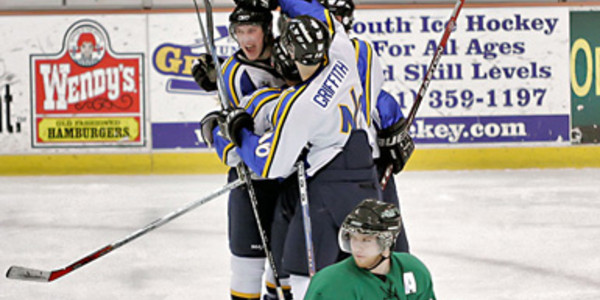 The NORPAC Pacific Division third place Eugene Generals (18-8) are currently 10-0 at Lane Events Center-Ice this season , but will put their unblemished home record on the line this weekend when they host the first place Seattle Totems (26-2). The games on Friday and Saturday at 7:35 PM against a first place Seattle team would normally seem like a daunting task, but the fact that the Totems have yet to lose in their thirteen road games makes the task appear to be even more daunting.

“Seattle’s always a tough team to match-up against,” Generals Head Coach Chris Hartly stated. “They have an abundance of experience and talent. Our boys have been playing tough at home, however, and I definitely wouldn’t count us out.”

The last time the Totems visited Eugene they were defeated by the Generals in the first round of the NORPAC Pacific Division playoffs. The Generals were able to beat the Totems by scores of 7-3 and 8-5 to clinch their second consecutive birth in the Pacific Division Championship Series. In the 8-5 series clinching win (the last game the Totems were in Eugene), Totems scratch Sam Ballenger attacked former Generals forward Matt Vasilie after Vasilie had been removed from the ice for a kneeing penalty. Ballenger was given a hefty suspension from NORPAC, but is back with the Totems this season and has four points in nineteen games.

The Totems are blowing almost everybody out of the water statistically this season. They have scored 221 goals this season (66 more than second place), and have allowed 71 goals this season (17 fewer than second place in the Pacific Division). The Totems have scored on 25.95% of their powerplay opportunities, which is 5.95% better than any other team in NORPAC. The Totems also have the second best penalty kill percentage in the league (89.80%), which attributes to their league best +34 on special teams.

The Generals have already let Seattle stop one ten game winning streak this season, but the Generals have been almost unstoppable at home. The Generals have outscored their opponents 76-22 in their ten games at home this season, and have allowed fewer than three goals in six of the ten games. However strong Seattle seems on paper, anything can happen when opposing teams step onto the ice at Lane Events Center-Ice. The Generals will have to step their game up if they want to keep their streak alive, but both games will be battles.

The games this Friday and Saturday against the Totems at Lane Events Center-Ice at 7:35 PM will be broadcast on GiTV. The game on Saturday is Bi-Mart 2-for-1 Night. Anybody who shows their Bi-Mart card at the ticket office will receive a free ticket of equal or lesser value for free. For more information on upcoming games or GiTV please visit eugenegenerals.com.