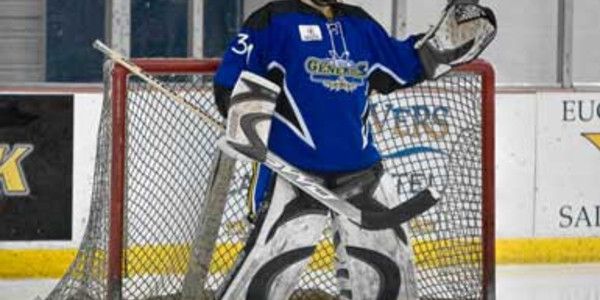 Eugene, OR – The Eugene Generals (19-8) put an end to the Seattle Totems (26-3) undefeated road record , and were able to extend their unbeaten streak at home to eleven tonight at Lane Events Center-Ice. The Totems were able to take the Generals late into the third period, but a last-minute heroic goal by CJ Henley, in his first game with the Generals, gave the home team a 4-3 victory.

“I’m very excited about the win, but more importantly I’m happier with how our guys executed tonight,” Generals Head Coach Chris Hartly stated. “Besides a little hiccup in the third period where Seattle got a lot of shots our defensive play tonight was outstanding. As long as we keep playing solid defensive hockey, I am confident that we will continue to have success.”

The Totems were able to pepper Generals goaltender Dylan Woodring with 57 shots (28 in the third period) in the game, but Woodring was able to stop all but three to give the Generals their first win against Seattle in three tries this season. The Generals now have a 6-1 all-time record against the Totems on home ice, and a 8-7 record overall.

When all the pressure was on the Generals big stars came to play. Henley was the star of the night for the Generals with his game winning goal with 55 seconds to go in the game and two assists, but Michael Frei was able to get two goals in the contest and Tyler Tymchuk was able to add one. Justin Adams added two assists on the night, and Duston Fender and Neil Holder each had assists.

The Generals will host the Totems tomorrow at 7:35 PM at Lane Events Center-Ice for Bi-Mart 2-for-1 Night. Anybody who shows their Bi-Mart card at the ticket office will receive a free ticket of equal or lesser value for every ticket purchased. The game will be broadcast on GiTV. For more information on upcoming games, special event nights or GiTV please visit eugenegenerals.com.