Three to Get Ready 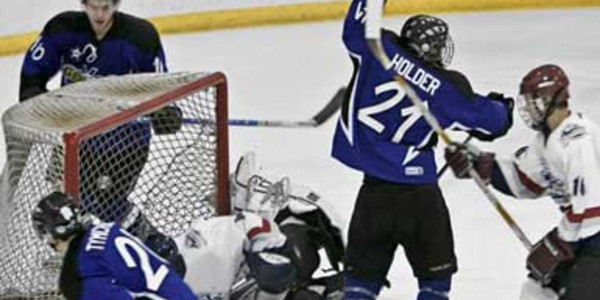 The Eugene Generals (25-9) will travel to Medford, OR tomorrow to face the Rogue Valley Wranglers (2-34). The Generals will then travel back to Eugene to host the Puget Sound Tomahawks (11-24) for a Friday/Saturday match-up that could drastically effect the Generals playoff positioning. This weekend will be the last time this season that the Generals will face teams who are not in the playoff picture.

The Generals were able to clinch a spot in the Pacific Division Playoffs last weekend with a 5-1 victory over the Coeur d’Alene Lakers. The win gave the Generals 50 points on the season, which is an insurmountable lead over the Tomahawks. The Tomahawks still have a mathematical chance to make the playoffs, but they would have to get a lot of help to overcome a 20 point deficit over the fourth place River City Jaguars (21-13). The Generals can all but eliminate the Tomahawks playoff hopes with two wins this weekend. The Generals could also make up some much needed ground on the Tri-City Titans (27-9), who lead the Generals by four points but have played two more games than the Generals.

“The games this weekend are big for us,” Generals Head Coach Chris Hartly stated. “We can’t get caught looking past Rogue Valley or Puget Sound. We do have a tough schedule after this weekend, but we’re just focusing on each game. Right now our focus is on sweeping Rogue Valley in the season series, and we’ll think about the rest later.”

The Generals have struggled against the Tomahawks this season, but have come away with five out of a possible six wins. Five of the six games have been decided by two goals or fewer, and two of the games have taken more than regulation time to be decided. The Tomahawks did recently ship out their leading scorer, Brandy Kaufman (53 PTS), and leading defensive scorer, Rafal Plonski (35 PTS), to the Rocky Mountain Division first place Helena Bighorns, but it is no reason to take the Tomahawks lightly. Every time the Tomahawks meet the Generals it is a battle, and there is no reason to expect anything less this weekend.