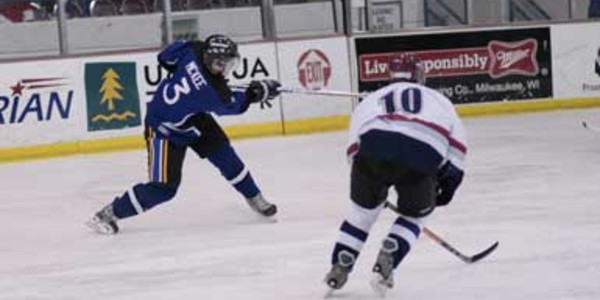 The Eugene Generals (28-9) defeated the Puget Sound Tomahawks (11-26) 9-2 tonight at Lane Events Center-Ice to clinch their third season series victory of the year. The Generals defeated the Tomahawks in seven of their eight match-ups of the season. The win keeps the Generals within two points of the second place Tri-City Titans, and pushes the Tomahawks within one game of elimination from the playoff hunt.

“It definitely feels good to see our guys perform the way they did tonight,” Generals Head Coach Chris Hartly stated. “We’ve been playing decent lately, and with some big games coming up its good to finish this weekend as strong as we did; especially against Puget Sound who always seems to play us real tough.”

Eight Generals had multiple point nights. Tyler Tymchuk led the way in scoring for the Generals with a hat trick. Joe Myers had one goal in the contest, and added four assists. Steven Slattery had one goal and two assists, John Strahle and Trent McKee had one goal and one assist, Justin Adams had three assists, and Erik Brody and Neil Holder each added two assists. Ian Evans and Nate Schursky each had a goal, and Michael Frei had an assist. In his first start with the Generals this season, Nick Maynes earned the win by stopping seventeen of the nineteen Tomahawks shots.

The Generals will try to keep their eight game winning streak alive next weekend in Eugene against the River City Jaguars. The Generals will host the Jaguars on Friday and Saturday night at 7:35 PM at Lane Events Center-Ice. The games will be broadcast on GiTV. For more information on upcoming games or GiTV please visit eugenegenerals.com.