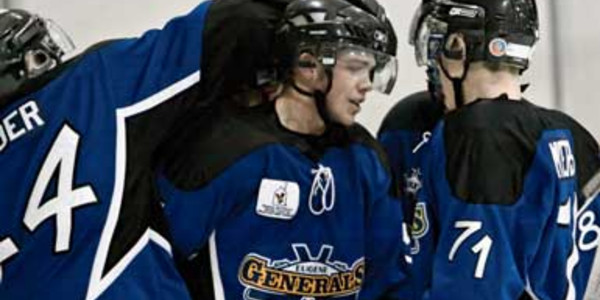 Eugene, OR – In his first game with the Eugene Generals, JJ Waldrop scored thee goals, including the 2OT game winner , to push the Eugene Generals (29-9) past the River City Jaguars (21-16) by a score of 7-6 tonight at Lane Events Center-Ice. The Jaguars were able to take the game into overtime by scoring two goals with less than five minutes to play in the third period, but the Generals were able to stay perfect in overtime this season.

“We had a great game offensively, but a terrible game defensively,” Generals Head Coach Chris Hartly stated. “River City’s a good, hard working team, and it doesn’t matter how many pucks we put in their net, if we don’t work hard all the time on the ice they’re going to take advantage of it.”

John Strahle also had a big game for the Generals, scoring two goals on the night. Steven Slattery and Trent McKee rounded out the goal scorers for the Generals. McKee was also able to add an assist tonight, along with CJ Henley, Brendan Elkins, Neil Holder and Nate Schursky. Justin Adams and Kyle Mills were each able to assist on two goals tonight.

The Generals will host the River City Jaguars tomorrow night at 7:35 PM at Lane Events Center-Ice for the final time of the regular season. The Generals will travel to Beaverton, OR February 16-17 for the final two games of their season series. The game tomorrow night will be broadcast on GiTV. For more information on upcoming games or GiTV please visit eugenegenerals.com.