Generals Hold On Against Storming Jaguars 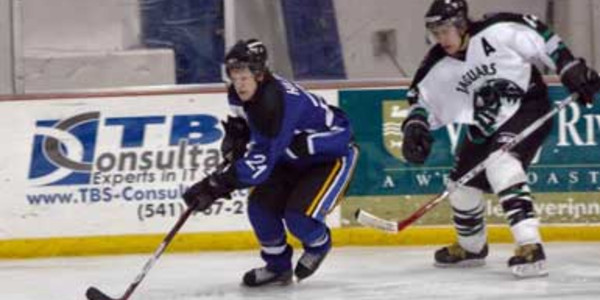 Eugene, OR – The Eugene Generals (30-9) were able to hold onto a 4-3 lead tonight at Lane Events Center-Ice after the River City Jaguars (21-17) stormed back from a 4-0 deficit. The win tied the Generals franchise’s winning streak record at ten, and puts the Generals win away from tying their franchise record for wins in a season. The Generals now trail the Tri-City Titans by two points for second place in the NORPAC Pacific Division, but they still have two games in hand over the Titans.

“We started off really strong tonight, but had a few defensive letdowns that cost us,” Generals Head Coach Chris Hartly stated. “We don’t want to make a habit out of winning that way, but it’s a win all the same. We’ve shown that we can win close games this year, and that can be huge in the last part of the season. Right now we have to put all our focus on Tri-City, and hopefully correct some of the mistakes we made this weekend.”

Nate Schursky was the hero for the Generals tonight, scoring two goals. Duston Fender and Tyler Tymchuk were able to tally the Generals other two goals. Michael Frei and Neil Holder each had two assists on the night, and Trent McKee and CJ Henley each had one assist. Nick Maynes earned the win for the Generals, and was able to stop 25 of the Jaguars 28 shots.

The Generals will host the second place Tri-City Titans next Friday and Saturday at 7:35 PM at Lane Events Center-Ice. Any youth, middle school or high school athlete that wears their sports jersey will get free admission on Friday night for Youth Sports Night. The game will be broadcast on GiTV. For more information on upcoming games, special events or GiTV please visit eugenegenerals.com.