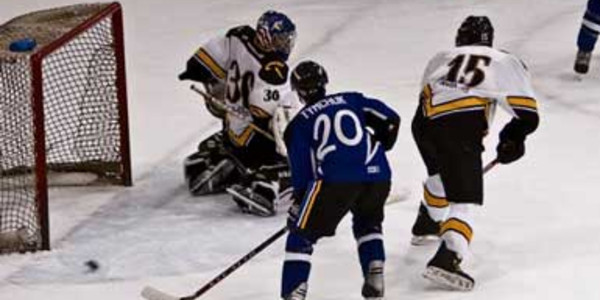 The Eugene Generals (30-10) had their ten game winning streak end tonight as the Tri-City Titans (32-10) defeated the Generals in a 7-1 shellacking. The Generals had multiple defensive breakdowns, and earned very few offensive opportunities. The Titans were able to capitalize on almost every opportunity they were presented, and didn’t let up until the final whistle blew. The Generals now trail the season series 4-2, and only have a chance to tie the Titans on the season.

“We gave them the game tonight,” Generals Head Coach Chris Hartly stated. “I’m not trying to take away from Tri-City’s game, but all their goals came directly off of our glaring defensive mistakes. We relied too much on skill tonight defensively instead of having our work-boots on and making the sure that the job was getting done.”

This was the only time Generals have been held below two goals in a game this season. Neil Holder scored the only goal for the Generals, and John Strahle and Kyle Mills got the assists. Jared Darby and Brandon Turley led the way for the Titans with three goals and an assist a piece. Damon Hollandsworth added three assists on the night.

The Generals will have another chance tomorrow to cut the Titans four point hold on second place. The Generals and Titans will meet again tomorrow night at 7:35 PM at Lane Events Center-Ice. The game will be broadcast on GiTV. For more information on upcoming games or GiTV please visit eugenegenerals.com.