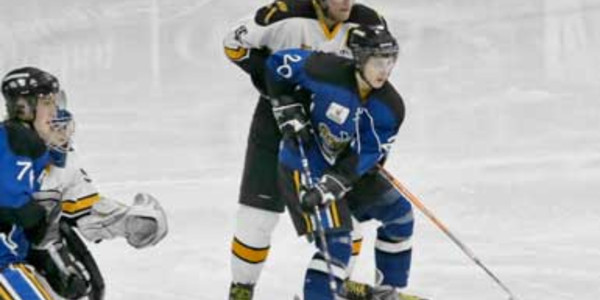 Despite scoring the first two goals of the game, the third seed Eugene Generals fell behind the second seed Tri-City Titans 0-1 in the 2008 Pacific Division Semi-Finals . The Titans scored the next four goals in the contest, and were able to take a 4-3 victory. The Generals scored with four and a half minutes left in the third, but were shut down by the Titans even with an extra skater for the last minute of the game.

“Tonight was very frustrating,” Generals Head Coach Chris Hartly stated. “We had complete control of the game after the first period, and we carried that momentum into the start of the second period. Tri-City got two lucky bounces that directly resulted in goals, and that gave them some new life. We just didn’t react fast enough to the momentum shift.”

Nate Schursky started the scoring 6:08 into the first with assists from Steven Slattery and Michael Frei. Justin Adams made it a 2-0 Generals lead just 44 seconds later, as he was assisted by Tyler Tymchuk. The Generals appeared to gain a 3-0 lead, but the goal was waved off due to a Generals player in the crease. Tri-City then proceeded to hold the Generals scoreless for 48 minutes, while they put up four goals. Justin Adams made it a 3-4 game 15:27 into the third with CJ Henley and Trent McKee earning the assists. It wasn’t enough, however, and the Generals will have to dig themselves out of a one game hole.

Tri-City accomplished their goal by taking at least one game in Eugene, and they have a chance to take a 2-0 lead tomorrow night. Brandon Butler was the star for Tri-City tonight as he was able to net the eventual game tying and game winning goals. Chris Alexander and Jake Flynn each added a goal and an assist, and Mike Gahringer, Alec Burks and Elliott Martin each had two assists. Titans goaltender BJ Leach was able to save 38 of the Generals 41 shots on the night to earn the win.

The Generals will try to even the series up tomorrow night at Lane Events Center-Ice at 7:35 PM. The game will be broadcast on GiTV. For more information on upcoming games or GiTV please visit eugenegenerals.com.