Generals Rally to Even Series 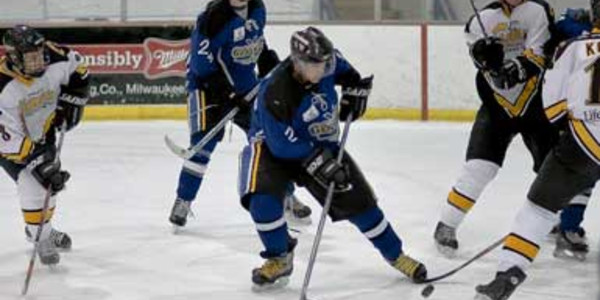 It looked as if the Eugene Generals would fall behind the Tri-City Titans 0-2 tonight in the 2008 NORPAC Pacific Division Semi-Finals after Tri-City put up three first period goals at Lane Events Center-Ice , but the Generals were able to net four unanswered goals in the second period and held the Titans scoreless for the remainder of the game. The series is now knotted at one game a piece, and will head to Pasco, WA for games next Friday and Saturday. The series will conclude in Pasco on Sunday if necessary.

“Tonight we showed how we can play for two periods and were fortunate enough for it to work out,” Generals Head Coach Chris Hartly stated. “We are still trying to put together a full game, but tonight I feel we took a big step forward.

Steven Slattery got the Generals back on track just 24 seconds into the second period, when Duston Fender assisted him. Four minutes later Michael Frei made it a one goal game with a shorthanded goal. Frei and Nate Schursky assisted Joe Myers on the powerplay eight minutes into the second to knot the score at three. Then, Myers and John Strahle assisted Michael Frei on the powerplay five minutes later to give the Generals the lead for good.

The Generals held the Titans scoreless for the final 47 minutes of the game. Garrett Driscoll gave up three goals in the first six shots he face, but was able to stop 23 consecutive shots to earn the win.

The Generals will face the Titans next Friday in Pasco, WA at 7:00 PM for Game 3 of the 2008 NORPAC Pacific Division Semi-Finals. The game will be broadcast on GiTV. For more information on upcoming games or GiTV please visit eugenegenerals.com.