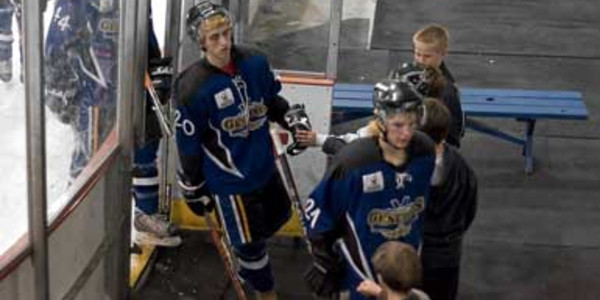 The Eugene Generals were eliminated in the 2008 NORPAC Pacific Division Semi-Finals Saturday in an 8-3 loss to the Tri-City Titans. It was a season of firsts for the Generals. The Generals set records for wins, home wins and winning streaks, but, unfortunately, the Generals also lost in the first round of the playoffs for the first time.

“We had a good run, but we fell short in the end,” Generals Head Coach Chris Hartly stated. “I feel like we improved immensely from the beginning of the season, but we definitely had our ups and downs. We did have one of the youngest teams in the league this year, and I expect us to be even more successful in our 2008-09 campaign.”

The Generals fell 3-1 in the Semi-Finals, but finished the regular season with a 33-15 record (best to date). The Generals had two ten game winning streaks on the season, and their previous record for consecutive wins was eight in the 2005-06 season. The Generals have a new single season scoring leader in Justin Adams. Adams recorded 106 points in 47 games, and is the only member of the Generals to ever record more than 100 points in a season. Trent McKee also set a new record for points among a defenseman this season with 49.

This was meant to be a rebuilding year for the Generals, but as the season progressed the Generals had the record of legitimate championship contenders. The Generals will lose Justin Adams, Aaron Morris, Steven Slattery, Nate Schursky, CJ Henley and Garrett Driscoll due to age restraints next season, and could possibly lose more due to upward movement in the Junior hockey ranks.

“We would be happy if every one of our remaining players moved up to higher levels of Junior hockey,” Generals GM Flint Doungchak stated. “We had numerous players move up throughout the course of the off-season last year, and even had a few move up during this season. Not many other teams can say that, and I’m proud that we’ve been able to develop those players in Eugene.”

The Generals will be in full recruiting swing immediately, and will be looking to fill the holes left behind by the players who will not be returning. For more information on the off-season and the upcoming season please visit eugenegenerals.com.