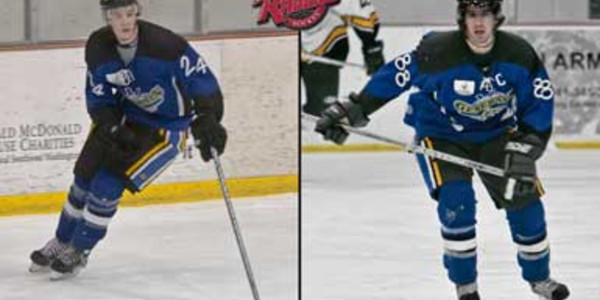 The 6-0 165 lb Adams set a single season scoring record for the Generals with 106 points, and ended his Generals career with 141 points in 88 games. The forward from Homer, AK also added seven playoff points in nine career games.

Schursky, who was traded to the Generals from the Rogue Valley Wranglers during the season, had 13 points in 18 games with the Generals. The 6-1 175 lb forward from Scottsdale, AZ played one season with the ACHA Division I Arizona State Sundevils before joining the NORPAC.

“We had [Nate] Schursky for a short time, but we know he can make an impact at the next level,” Generals Assistant Coach Jay Miller stated. “[Justin] Adams was a huge asset to us while he was here, and hopefully he can apply the leadership that he learned here for Franklin Pierce. One of our major organizational goals is to move players on to the next level, and we are extremely proud to move two great players, and two great people, into collegiate hockey.”

Sean Woodring has made a name for himself and the Generals at Franklin Pierce. Woodring, who had 17 points in 22 games with the Generals, was the sixth leading scorer for Franklin Pierce this season with 21 points. Woodring is the first Raven to earn a major men’s ice hockey award from the ECAC Northeast as the Co-Freshman of the year.