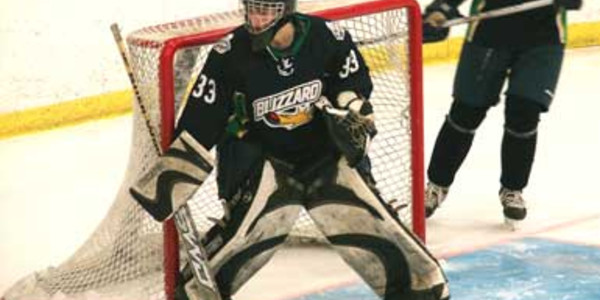 Since being called up, Woodring has a 7-5 record with the Blizzard as well as a team leading 3.07 GAA and .907 SV%. Woodring didn’t start a game for Alexandria in their first round match-up with the Southern Minnesota Express, but he backed up the starting goaltender, Ryan Leets, en route to the Blizzard’s first ever trip to the second round of playoffs. Woodring, and the Blizzard, will now face the Springfield Junior Blues for a chance to move onto the Robertson Cup.

Romero and Cristiano have found themselves on the Pembroke Lumber Kings, who are the top ranked Junior A team in Canada. Romero and Cristiano played for the Generals in their first two seasons, but made their way to Canada this season. Romero was seventh on the team in scoring during the regular season tallying 19 goals and adding 25 assists in 57 games. Cristiano, a punishing stay at home defenseman, played in 32 games and had two assists for the Lumber Kings.

Pembroke recently won their second consecutive CJHL Championship, and will be the favorite heading into the Fred Page Cup. The Lumber Kings first test will come against the Weeks Crushers of the MJAHL. The winner of the Fred Page Cup will be one of five teams vying for the RBC Cup, and the Canadian Junior A National Championship.

“It’s great to see our former players be so successful at the next level,” Generals GM Flint Doungchak stated. “We pride ourselves on development, and it is great affirmation to see Dylan [Woodring], Lucas [Romero] and Carrick [Crhistiano] be so instrumental in their team’s success. I wish them all the luck in the world, and I hope they go out and win a couple of championships.”