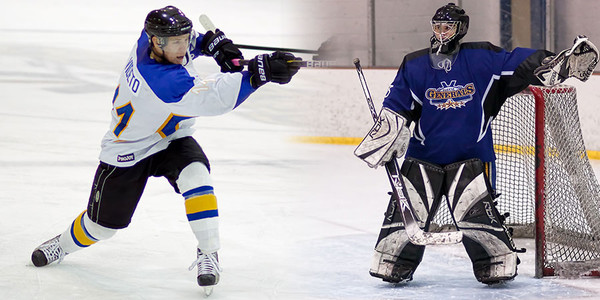 Former Generals Christofer Videto (2010-12) and Mario Retana (2009-11) faced off this past weekend at the ACHA Division II Western Regional Tournament, with Videto skating for the Utah State Aggies while Retana played between the pipes for the San Jose State Spartans.

Despite technically overlapping in juniors careers, the two former Generals never actually played with one another as Videto joined the Generals late in the 2010-11 season after Retana had already wrapped up his hockey career in Eugene. The matchup between the two former Emerald Valley standouts did not disapopint with both players putting up notable performances as Videto netted a go-ahead power play goal in the second period while Retana made a whopping 63 saves in net.
The game was a seesaw affair that saw the Spartans lead 1-0 after the first period while the Aggies lead 2-1 after the second period, but a SJS goal midway through the final period tied the score at 2-2, forcing overtime. Despite outshooting the Spartans by a nearly 3:1 margin (66-26), the Aggies were only able to muster the two goals in regulation and both sides went into overtime, where the Aggies were eventually able to keep their season alive and pick up the dramatic 3-2 win.

AND THE AGGIES WIN. Game winning goal scored by Alex Herman assisted by Gary Higgs. The Aggies will take on UNLV tomorrow at 1 pm.

The following day, Videto and Utah State faced off against the UNLV Rebels with the final spot to the ACHA DII National Tournament on the line. After the nail-biter vs. San Jose State the night before, Sunday's matchup proved to be a breeze as the Aggies coasted to a 4-1 win behind yet another goal by Videto, who finished with a team-high three points during the regional tournament.