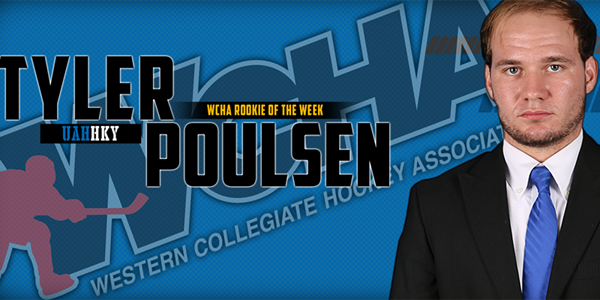 Originally from Arvada, Colorado, Poulsen had a very successful career with the Generals, playing in Eugene during the 2008-09 and 2009-10 seasons. During his time with the Generals, Poulsen accumulated 66 points (20 goals, 46 assists) in 63 regular season games.

After his time with the Generals, Poulsen moved to the North American Hockey League (NAHL), where he played for a few different teams such as the Kenai River Brown Bears, Odessa Jackalopes, and Aberdeen Wings. Before joining the Alabama-Huntsville Chargers, Poulsen was a member of the Topeka Roadrunners, where he gathered 93 points in 109 games with the team.

University of Alabama in Huntsville is a member of the Western Collegiate Hockey Association, a 16-team league which operates in NCAA Division I. So far this season, Poulsen has five points (three goals, two assists), with three points coming in the last four games.

Visit the Generals website for a full list of Generals alumni who have continued their hockey careers at higher levels.