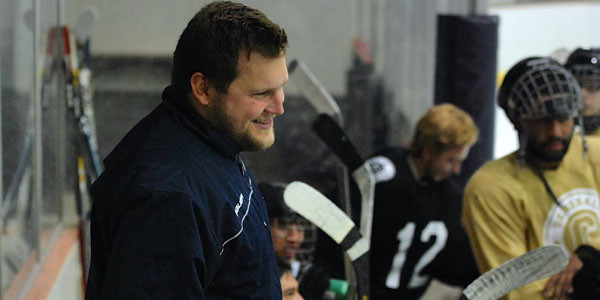 The Northern Pacific Hockey League is one of the oldest Junior Tier III hockey leagues within the nation. Only through age can a league have a life long impact on an individual player or coach. At least that’s true for Justin Kern, who is now the head coach of the Eugene Generals, but he was also a former player for the club too.

After graduating high school in 2005, Kern wanted to continue his hockey career, but was unsure about where he was going to play. So, he packed his bags and went to the Global Hockey Camp and Clinic in Vancouver, Canada. It was there when he met Robert Freeland, the first head coach of the Generals.

At the showcase, Kern impressed many of the scouts and coaches; in fact, his performance led to him getting tryout invitations from teams all over the nation. But, wanting to stay close to home and “being from Alaska [Kern] didn’t want to go to the East Coast, Minnesota, or anything like that.” This led to Kern narrowing his choices down to three teams, all of which were in the NPHL at the time.

The first and only team he tried out for was the Generals. Kern then made the team and was asked to sign with the organization, which he did. He was then set to play for the Generals in the team’s first season in the NPHL. During his time with the team, Kern was able to develop and hone his skills enough to move onto Division III hockey, thus signing with Concordia University in Wisconsin. Unfortunately, due to a wrist injury Kern was unable to play hockey for the university.

While at school Kern studied business marketing and that led to him coming back to Eugene, Oregon for an internship with the Generals. During his internship he was given the task to create a marketing campaign to save the same ice rink he played on only a few years before. Kern says at the time of his internship, “the county had decided to close the rink down. So we did a lot of campaigning all summer…to get people to sign a petition for the county to not shut the rink down.”

After a long summer, the campaign was successful. Kern, the Generals, and the greater Eugene hockey community were able to garnish enough signatures to save the ice rink. After the campaign, the Generals’ General Manager, Flint Doungchak, approached Kern about coaching the Generals in the near future. But, Kern still had to finish his senior year at Concordia University.

A few years passed as Kern waited for his long-term girlfriend, now wife, to graduate from her graduate program in 2013. Still in contact with the Generals once she graduated, Kern was offered a coaching job with the team. Him and his wife then moved to Eugene in June 2013, this is when Kern began his new job as the Eugene Generals’ assistant coach. He continued his career as an assistant coach until mid way through the 2014 – 2015 season. During December of 2014, Kern was promoted to head coach.

After a difficult 2014 – 2015 season, Kern is looking forward to starting his first full season as a head coach. He notes that the turn out for tryouts was close to 40 kids, which is impressive given the layout of junior hockey and having over 160 teams within its structure. Kern also used this camp to start building relationships with future prospects that are too young to play in the league, but will become eligible in the coming years.

After some tough decisions, Kern was able to finalize his first roster as head coach. He looks forward to building upon the league’s values of developing and progressing players for the next level.

Kern and the Generals open the season on September 25th, 2015 at 7:35 pm against the Bellingham Blazers, in Bellingham.