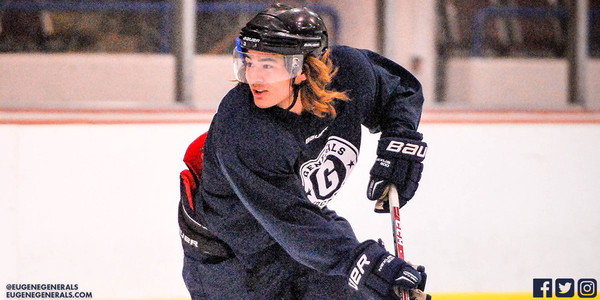 You see them on the ice, but what are they like off of the ice? Throughout the 2016-17 season, we'll invite you to #MeetTheGens by taking an in-depth look at the Eugene Generals roster one-by-one. Today, we introduce you to forward, Josh Hawn.

Josh Hawn, a native of Pullman, Washington, is currently in his second season with the Eugene Generals. Growing up in a hockey-loving family, Hawn got his start on the ice at a very young age after watching his brothers play and, among other things, after watching the Mighty Ducks films. Before joining the Generals, Hawn was a standout player for the Moscow Bears during his time in high school. After talking to Assistant Coach Daniel Gomez, a former Generals player himself, Hawn decided that playing for the Generals was his best opportunity to help further his hockey career while testing himself against a high level of competition.

Hoping to continue his hockey career at the collegiate level, Hawn hopes that his play with the Generals this season will catch the eyes of college scouts around the Northwest and at USPHL Showcase Series events. Currently, Hawn is enrolled at Spokane Falls Community College where he is participating in online general studies classes during his away from the ice time. Balancing school and hockey at a time when many juniors players his age strictly focus on hockey, Hawn’s aim is to make himself appeal to college scouts not just on, but also off of the ice, while also helping make the eventual transition to the collegiate level much more seamless.

When he is not playing hockey or hitting the books, Hawn likes to spend as much time as possible with his teammates, who he says might as well be his brothers. “This is the closest team that we I have ever been a part of it,” says Hawn. “We are like one family.”

In his first season with the Generals, Hawn played in 39 games while posting 5 goals and 9 assists for 14 points, including two game winning goals. Assistant Coach Daniel Gomez spoke highly of the young forward, stating, “He has displayed tremendous leadership since he has arrived in Eugene. He is constantly thriving to be a better player.”

The Generals will now travel to Kennewick, Washington for a two-game series vs. the Tri-City Outlaws, starting on Friday October 7th and concluding on Saturday, October 8th. Both games are scheduled to start at 7:30pm and will be available to watch online at FastHockey.com.

The Generals home schedule resumes on Friday, October 14th as the Generals welcome the West Sound Warriors to town for the very first time this season. Tickets can be purchased online at www.EugeneGenerals.com or in-person at the Eugene Generals box office before every home game, located at The Rink Exchange. Remember to follow the Generals on Facebook, Twitter, and Instagram for updates and behind-the-scenes content throughout the 2016-17 USPHL season.