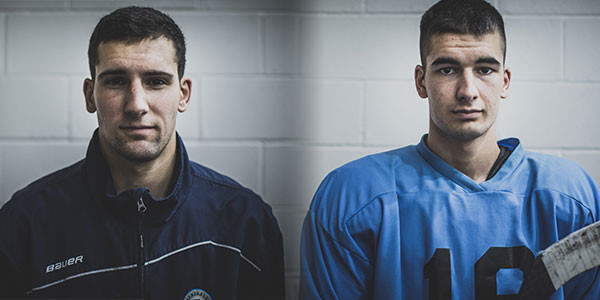 Eugene Generals Assistant Coach Daniel Gomez and his younger brother Dustin Gomez, a former forward for the Eugene Generals, each spent much of their summer months serving in the United States Marines.
Dustin, who concluded his Generals and junior hockey career this past season, opted to become a fully enlisted Marine upon the conclusion of the 2015-16 season. Upon reaching that decision, Dustin chose to hold his Oath of Enlistment ceremony in front of teammates and fans during the first intermission of December 18th’s game vs. the Seattle Ravens, a game that the Generals coincidentally led 1-0 at the time thanks to a goal from Gomez himself.
Following the conclusion of the season, Gomez travelled to the Marine Corps Recruiting Depot in San Diego, California for Basic Training which he completed just this past week. “Bootcamp was a very high stress, hard-charging environment,” says Dustin.” You are on your toes the entire time, looking over your shoulder for a drill instructor. You are told when you are going to do everything, whether that be simply putting on a shirt or even going to eat. Everything was coordinated for you every minute of every day.”
With boot camp having now concluded, Dustin will head back to San Diego, this time to Camp Pendleton, where he will continue training that will involve learning more about weapon systems and their functions during combat. “Becoming a Marine is a big accomplishment for me,” says Dustin. “That’s something I’ve always struggled with, but after becoming a United States Marine, the confidence I have in myself has skyrocketed. It has helped me deal with my fears and difficulties in life in a much more constructive and positive way."
Daniel, a former Generals player himself and now preparing for his second second as the team’s Assistant Coach, has been a member of the United States Marine Reserves for the past four years, and thus is always on call for military service, whatever that may entail. Holding the rank of Corporal and operating as the Section Head of Heavy Equipment Operations for Engineer Services Company, Daniel attends monthly training exercises, or Reserve Drills, where he and other Marines maintain proficiency in their Military Occupational Specialties. Gomez recently returned from a two-week exercise in Oakridge, Oregon helping to maintain and revamp roads for the U.S. Forest Service. The exercise not only provided a great opportunity for his fellow Marines to train, but it also saved taxpayers upwards of $80,000 in road maintenance. “It’s a great situation for our Company,” says Daniel, “to be able to conduct training in road conditioning, tree falling, and culvert construction while producing the forest service work that they otherwise couldn’t afford." 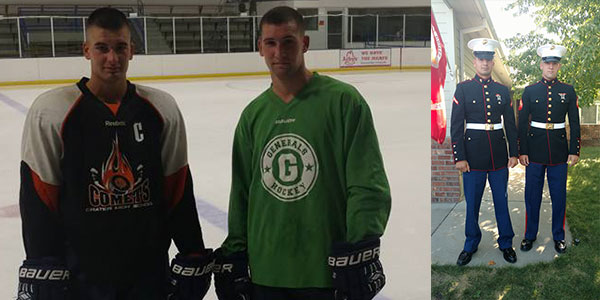 "There's a bond between all Marines past, present, and future," says Daniel proudly, "and that bond is truly engrained within the hearts of Recruits as they work to earn the title. As recruits go through training, they're stripped of everything that makes them individuals. You have to speak in the third person and request permission to do anything. 'This Recruit requests permission to make a head call.' You are constantly doing things that are challenging on many different levels. You undergo tests of endurance, sleep deprication, and challenges that require you to work together with others as a team. While going through all of that, you are also being given crash courses on customs and courtesies, Marine Corps history, and combat first aid. All of that hardship and espirit de Corps builds a pride in earning the title of 'Marine' that the other services don't really have. That's part of the reason some people say that there are three military branches: Army, Navy, and Air Force ... but the Marines are a cult. He [Dustin] is part of that now."
The Eugene Generals proudly congratulate Dustin Gomez on his completion of boot camp and entrance into the United States Marines.